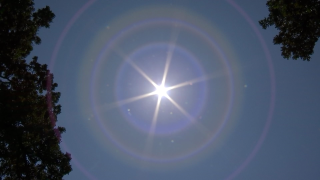 Heat indices could potentially approach 110 degrees on Tuesday afternoon across the Chicago area, with the National Weather Service issuing a series of heat advisories in response to the sweltering temperatures.

According to NWS officials, a heat advisory has been issued for most of northern Illinois through 8 p.m. Tuesday.

In McHenry, DeKalb, Kane, LaSalle and Kendall counties, heat indices could potentially reach up to 108 degrees, according to officials. At those temperatures, heat-related illnesses can set in quickly for anyone spending prolonged time outdoors, and residents and workers are being urged to drink plenty of fluids and to remain inside air-conditioned rooms whenever possible.

An advisory is also in effect in Lake, DuPage, Cook, Grundy and Will counties through 8 p.m., with heat indices expected to rise to more than 105 degrees during the afternoon hours.

The city of Chicago could potentially see a record-high temperature at O’Hare International Airport on Tuesday, with the previous record currently sitting at 101 degrees.