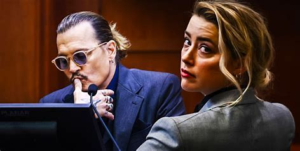 The jury has reached a verdict in the highly-publicized defamation trial between Johnny Depp and Amber Heard. The former couple met on The Rum Diary set in 2011 and married in 2015. After one year of marriage, Heard filed for divorce and accused Depp of domestic abuse. Ever since, the two have been embroiled in a contentious legal battle. Depp previously lost a libel case in the UK which he brought against the British tabloid The Sun for an article that referred to him as a “wife beater.”

In 2018, Heard penned an op-ed for The Washington Post with the help of the ALCU in which she detailed her experience of domestic abuse and sexual violence, though she never mentioned Depp by name. Despite that, Depp claims the accusations have severely damaged his career and reputation. In response, he filed a $50 million defamation suit against Heard, which was the scope of the recent trial in Fairfax, Virginia.