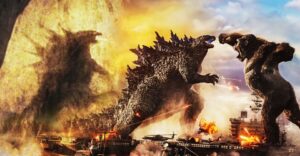 MonsterVerse’s ancient Titan War explains why Kong lost in Godzilla vs. Kong. Despite being depicted as the movie’s loveable underdog hero, victory just wasn’t in the cards for the King of Skull Island. Kong suffered two crushing defeats at the hands of Godzilla in the fourth MonsterVerse installment.

It was made clear from the onset that winning was always going to be an uphill battle for Kong. Though the ape struck the first blow in Godzilla vs. Kong, it was demonstrated early on that Godzilla had him beat in a contest of raw power. His atomic breath put Kong at an even greater disadvantage. Acquiring the axe helped even the odds a bit and gave him a fighting chance against Godzilla, but while it certainly helped, it ultimately wasn’t enough. In the end, Godzilla unleashed his wrath and overwhelmed his ancestral rival. By winning, Godzilla held on to his crown and cemented his status as the King of the Monsters.