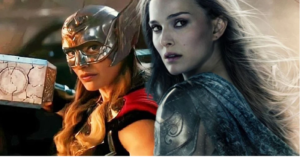 director Taika Waititi explains why he’s bringing Jane Foster back for the latest Marvel Cinematic Universe film. Natalie Portman joined the MCU as Jane in the franchise’s early days in 2011’s Thor. Jane’s background as an astrophysicist makes her a helpful ally for Chris Hemsworth’s God of Thunder considering his mythical background isn’t exactly rooted in Earth’s science. Following their adventure in the first Thor movie, Portman returned for the film’s 2013 sequel, Thor: The Dark World, solidifying herself as a partner and love interest of the title hero. However, the romance does not go far as Jane is not featured in the third Thor film, Thor: Ragnarok, and has since only made a brief, dialogue-free cameo in Avengers: Endgame.

For President Biden’s approval rating to go up, it’s obvious what needs to go down